Grab a torch and let’s explore the next episode of ‘Dark History’. Shine a light on the shadowy realm of humanity’s ancient past and uncover how ancient cultures lived with death. Get ready to exhume dirty facts about archbishop mummies, purgatory, hungry vultures and sky burials.

We learned that tossin’ dirt on a vacant body won’t preserve its squishy innards. Unfortunately.

Sophisticated techniques needed to be discovered, and tricks of the ancient’s trade, are still buried outside the realm of our knowledge. Creating a mummy ain’t easy. You only have one chance to get things right or you’re just cookin’ maggot food. Tasty.

Every culture has a special way to deal with their dead.

Ancient Tibetans hauled their deceased comrades on top a mountain—hungry vultures took care of the rest. Literally. And hopefully. This ritual was known as a ‘sky burial’ and it’s still being practiced.

Picky avian eaters nibble on carcasses, and they don’t leave behind any leftovers.

If deceased individuals were not offered to insatiable vultures, they returned as a vengeful ghoul, and, well…you can imagine what happened next.

Other cultures just said, “No way to decay”.

Mummification is the ancient art of ripping off Death, because Death, after all, is a greedy bastard. We’re supposed to give it all up after we bite the big one: skin, organs, eyeballs, hair, nails—all the good stuff. Giving up our life just ain’t enough.

Medieval clerics devised clever methods which were designed to rip-off Death, and so did Egyptians, of course. Medieval mummy recipes probably weren’t the same as the ancient Egyptian’s recipe, however, the outcome was the same (more or less).

Are you ready to meet a real mummy? 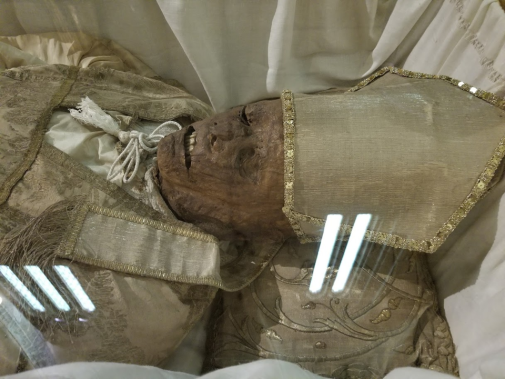 Dom is a certified mummy, and a good lookin’ one, too!

The archbishop’s teeth seem like they were bleached by angels. Dom’s skin looks like turkey jerky, but he’s still got it, and that’s impressive. Lips are overrated. Do you know a dead person who still has their nostrils? Exactly. 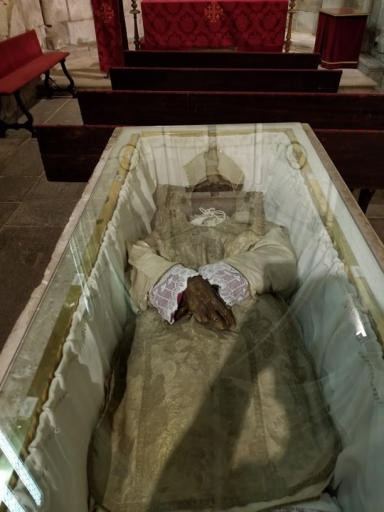 Peder Winstrup, a magnificent 17th-century mummy, forfeited his life in 1691. Peder kept his beard, though. And that’s what matters.

Dom and Peder probably have a few things in common—including what’s hidden inside their comfy pillows. Peder’s pillow was stuffed with secret herbs, and it looks like Dom’s pillow could actually be his personal spice rack.

Living on a Prayer

Let’s face it—how long would it take you to absolve all your sins?

Purgatory is where dirty souls get blasted with a fire hose. Souls gotta be squeaky clean, especially if they want to ascend through the Pearly Gates. Oh! Remember that scrumptious candy bar you stole? Guess what? That artificial nougat bar is now gonna cost you some time, and a lot of it, pal.

Purgatory is also where bad souls sit in a dark corner and think about every pitiful atrocity they committed, like forgetting to feed their sister’s hamster, or banging the boss. Everyone needs a raise, right?

Prayer helped to speed up the process.

Many people (knights, for example) commissioned effigies—carvings or sculptures which eternally depict themselves praying. Medieval effigies were commonly placed inside churches, that way people could offer their free prayer to the dirty soul who’s trying to absolve a few thousand sins. No big deal.

The more prayers, the better. Apparently.

Secret herbs, mummies or hungry vultures—we’ll continue to cheat Death and find a way to take our life back. Keep your torch nearby and someday we’ll shine a light on the next episode of ‘Dark History’.